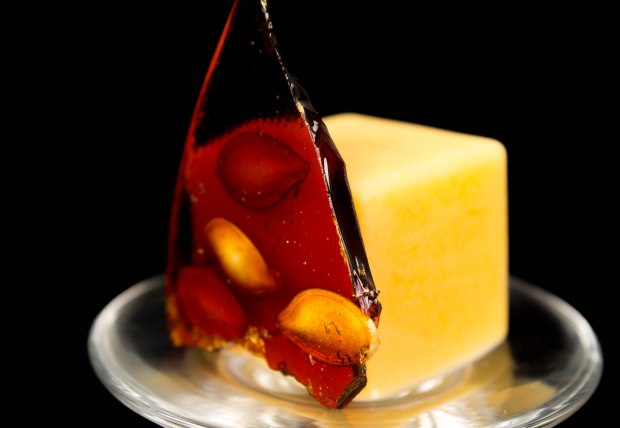 One thing we are trying to ensure we do is to complete recipes when their ingredients are seasonally available. We’ve missed the boat on some of the berry and recipes, so we will try to catch those next season. For this season, we are trying to complete all of the gourd, potato and pear recipes. Since pumpkins are openly available, we jumped at the opportunity to make this recipe! 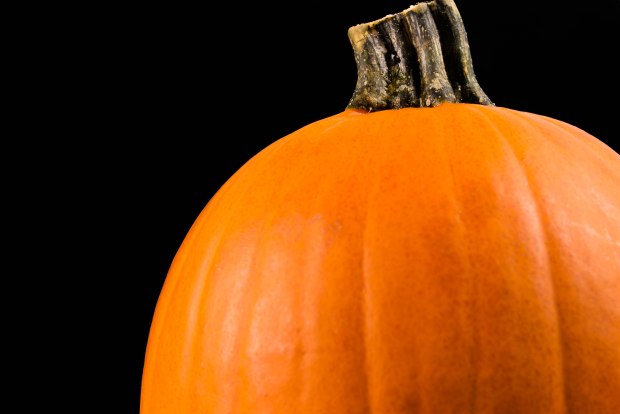 Before we get into describing the procedure of the recipe, we wanted to note a very important deviation from the initial recipe and our rationale for doing so. We used a New England Pie pumpkin variety in place of a Cinderella pumpkin. In terms of the rationale, have you ever seen a Cinderella pumpkin? Their size would have yielded more pumpkin ice cream than the two of us could consume. Our research into the Cinderella pumpkin variety uncovered that it has a creamy consistency and sweet flavour that is sought after for use in pies. As the New England Pie pumpkin had a similar flavour profile but was 1/8 of the size, we opted for this.

We cut the pumpkin in two, removed the seeds (and some pulp) and placed them in a bowl of water.

The halved pumpkin was placed onto a baking sheet (skin side up) and baked until tender. Next, we removed the flesh from the pumpkin and blended it with honey until we were left with a smooth purée. 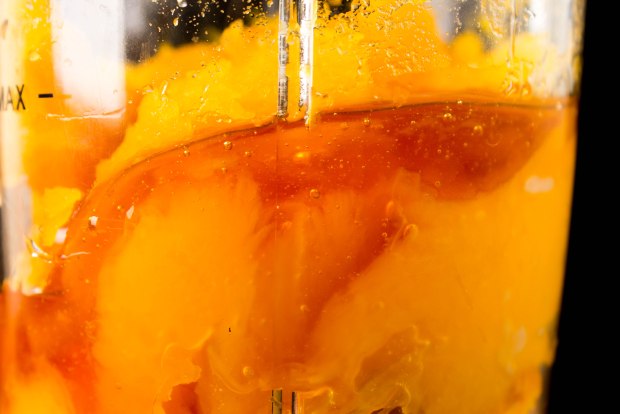 Next, we combined the pumpkin purée with cream and set it aside.

In another bowl, we whisked egg yolks and sugar until they turned a creamy white colour. Below is a picture of the mixture before and after whisking. 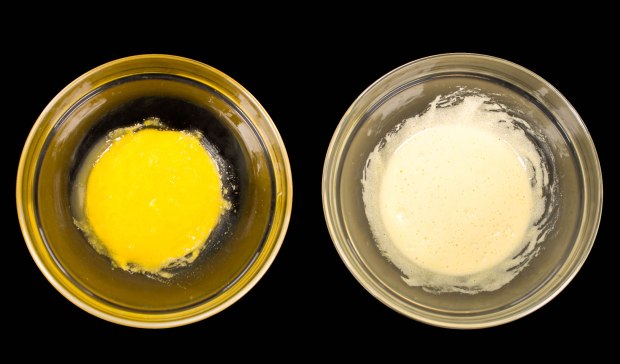 In yet another vessel (this recipe resulted in a lot of dirty dishes!), we heated some milk and cream over low heat. We tempered the egg mixture with a little warm milk and combined it with the warmed milk. This was cooked until the custard coated the back of a spoon and then passed through a conical strainer. Finally, we combined the custard with the pumpkin puree and allowed for it to cool.

Next, we washed the pumpkin seeds, coated them with olive oil and roasted them in the oven until they were golden brown.

While these were cooling, we prepared a caramel by combining 1 cup of sugar with approximately 1/4 cup of water and heating the mixture until it was a golden brown (this wasn’t part of the recipe, this was something we decided to do to make the plating look more unique). 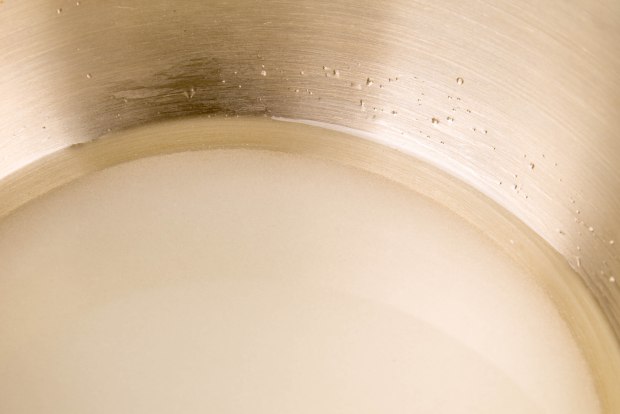 We then combined the caramel with the roasted seeds and poured it over a silicone mat to cool.

Turns out, coating pumpkin seeds in oil makes them harder to coat in caramel! So this process required pushing the seeds down with tweezers until the caramel was cool enough to keep the seeds suspended. 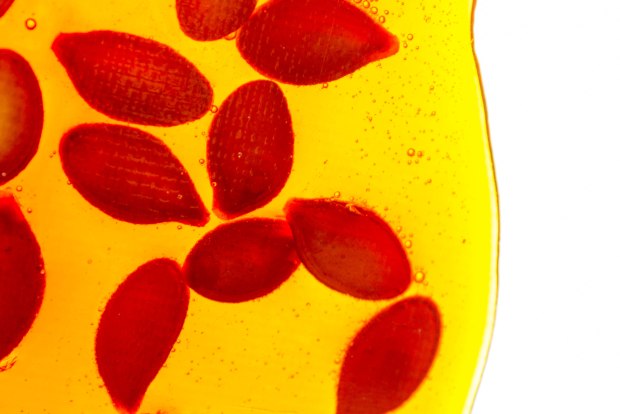 In an effort to ensure that our pictures don’t all look the same, we deviated again from the recipe (only slightly!). We’ve read online that another option for creating a creamy ice cream is to freeze the mixture and then run it through a food processor (instead of running the mixture through an ice cream machine). We liked the idea of having something that looked visually very different than our other ice cream posts though, so we plated the ice cream straight out of the freezer (after freezing the mixture in an ice cube tray).

The resulting “ice cream” had larger ice crystals than typically expected for an ice cream, but it was visually stunning when paired with a roasted pumpkin seed caramel shard.

We blended some of the ice cream cubes in our food processor to try as well, and this yielded the expected ice cream texture. We didn’t bother to try placing the resulting ice cream into the ice cube tray though, because it would have been very difficult to remove them from the tray.

The ice cream tasted like a sweet pumpkin soup and paired really well with the bitterness of the caramel. We poured the caramel a little thick, so if we were to try this again, we would aim for a thinner caramel. All in all, this was a delectable autumn treat that we thoroughly enjoyed!

After a short break for family visits and work-related activities, we are now finally getting to posting some of the recipes we were able to finish in between family-related events (in order, hopefully). I believe our first recipe was “Nothing Ice Cream” –which turned out to be a really interesting (albeit frustrating) experience and a great learning opportunity. We had the day off due to Good Friday, and had planned on waking up late and making some ice cream and fruit powders to serve as dessert for the family Easter dinner.

The day started off really promising. We had bought some beautiful citrus: lemons, limes, blood oranges and grapefruit. These had very vibrant colours, and made for some really nice pictures.

While Melissa was juicing and photographing the citrus, I quickly made the ice cream using eggs, milk, cream and a little sugar to form a custard, then churning the mixture in an ice cream maker.
With the ice cream done, and four cups of different citrus juices ready, I turned my attention to making the powder. That’s when things started to get sticky!

The instructions on how to make the powder were clear: mix albumen (egg white) powder with citrus juice, then heat some sugar and water to the soft crack stage, mix the juice with the sugar, stir and voilà! Fruit powder! Nope. Not what happened.

As I don’t have much experience working with sugar, my first attempt was with the lemon juice as we had extra lemons on hand in case of failure. I set some sugar and water to a boil, and the juice to simmer until reduced by half. Then I tried adding the albumen power–the powder formed huge chunks, and seemed to be impossible to incorporate. This is when the troubleshooting started. Maybe the juice was too hot, and it was cooking the egg white powder? I whisked until it was relatively homogeneous, and then added it to the sugar syrup that had reached the proper temperature (more quickly than I had anticipated). This first attempt resulted in a yellow sticky glue, not quite the outcome we were hoping for!

To keep a long story short, we proceeded to attempt to make powders with all of our citrus juices while following the instructions in the book to the letter. This resulted in varying levels of success ranging from:

The only citrus juice that managed to resemble powder was the grapefruit juice, and we have no idea why it worked while the others didn’t.

A few weeks later we had to opportunity to travel to Montreal to eat at Toque!. While there we had the amazing opportunity to speak to one of their pastry chefs, and asked him what the secret was to making this elusive fruit powder. To keep the albumen powder from clumping, he recommended mixing it with some sugar first in order to break up all the clumps and to keep them separate even after sifting. For the sugar part, he explained that the most important part of the procedure was to dehydrate the mixture, and that this could be done at a lower temperature. We had erroneously focused on bringing and keeping the sugar caramel to the right temperature, which resulted in sticky failure. Good to know!

Armed with this new knowledge, the next weekend we bought a bottle of elderberry juice which has a beautiful dark purple colour. We hoped to make a fruit powder that could nicely contrast our only other successful powder (grapefruit, which had a light yellow colour).

Following the chef’s tips, the powder turned out perfectly! The colour turned out beautifully, and tasted strongly of elderberry without an overpowering caramel flavour. Finally, success!

Plating and eating this desert was really fun. It looked great on a plate, and the play on textures is really different and fun.

Initially we were worried the nothing ice cream would taste too eggy as the recipe used quite a bit more egg yolk than we were used to–but the flavour helped to enhance the taste of the powders. 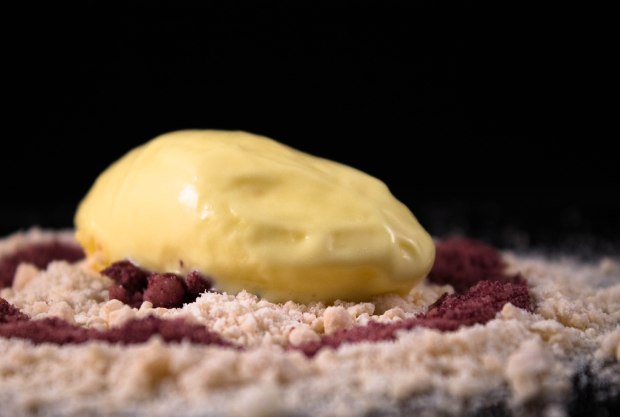 We learned a lot making this recipe, and we’ll certainly be making this one again for friends!